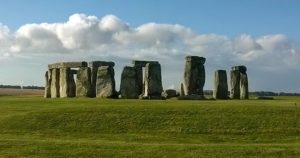 Scientists have unveiled a remarkable new picture of Stonehenge and its surrounding areas, including the remains of an even bigger ‘super henge’ nearby.

The mammoth project, led by Prof. Vince Gaffney at the University of Birmingham in conjunction with the Ludwig Boltzmann Institute for Archaeological Prospection and Virtual Archaeology, is likely to transform our knowledge of this iconic landscape.

For the project, Dr Richard Bates of the School of Earth and Environmental Sciences, used remote sensing techniques and geophysical surveys to discover hundreds of new features which now form part of the most detailed archaeological digital map of the Stonehenge landscape ever produced. The startling results of the survey include 17 previously unknown ritual monuments dating to the period when Stonehenge achieved its iconic shape. The project has also revealed completely unexpected information on previously known monuments. Arguably the most significant relates to the Durrington Walls ‘super henge’, situated a short distance from Stonehenge. This immense ritual monument, probably the largest of its type in the world, has a circumference of more than 1.5 kilometres (0.93 miles). The geophysical results have provided a new model of this feature that encompasses the vast monument in one complete picture. Geophysics used in archaeology may never be the same again and the team now hopes to apply a similar approach to other iconic sites. In Orkney, Dr Bates is currently applying some of the new techniques to study the landscapes around the henges of the Ring of Brodgar and Stones of Stenness.

The project is the subject of a BBC documentary Operation Stonehenge: What Lies Beneath, which aired on BBC 2 on 11 September. [press release].

The project recently was awarded Research Project of the Year 2017 by Current Archeaology magazine.